One more day of Stampin' Up!'s Convention 2012 to recap from Saturday, July 21. I spent a lot of time during this convention checking out the boards full of stamped samples and also the product displays. 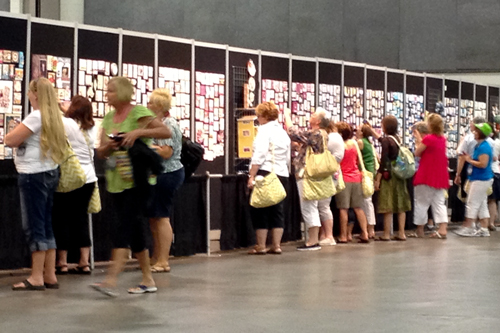 So many great cards, scrapbook pages and other amazing items made by demonstrators were displayed on these boards. Also, the product displays not only featured current products from the 2012 and upcoming Holiday catalogs, but also samples made by the SU Concept Artists, some of which were photographed for the catalogs. Nothing beats seeing them in person though. 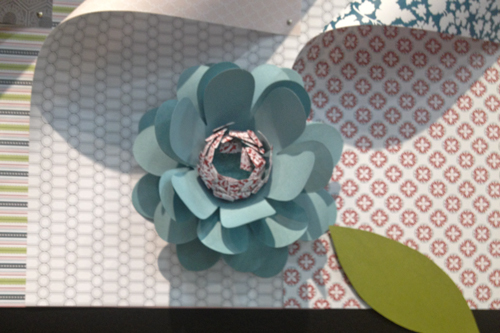 Loving these flowers, and this is my current favorite SU paper...the Twitterpated line. It even has matching fabric! 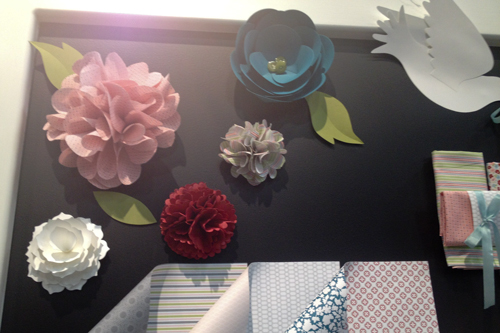 Love the variety of flowers that were created here. 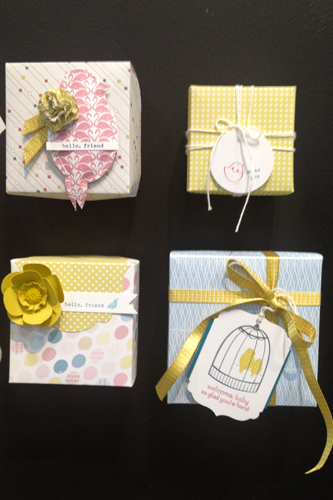 These adorable decorated packages were using the Birds of a Feather paper and the set Flock Together. Cute, cute!

And, last but not least, the beautiful ornaments made with the Ornaments Keepsakes set and matching dies. See for yourself! 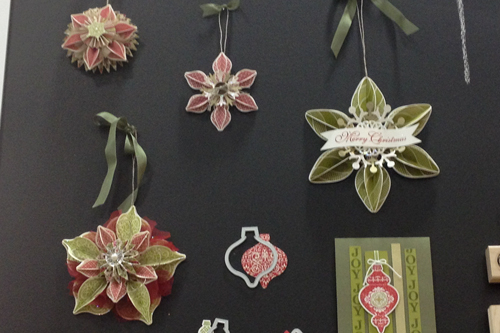 I was able to get my picture taken with Shelli before the last session of the day. 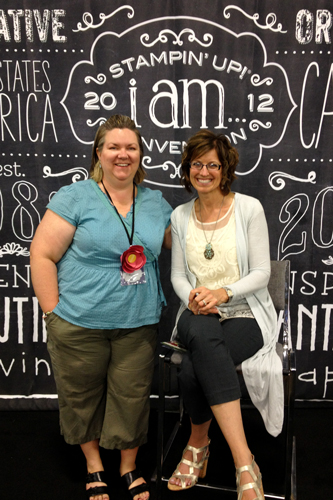 By the way, I loved the chalkboard graphics that they used for the theme of Convention. I had to buy the My Digital Studio album template that has all of these elements, so once I get my album completed I'll post it here. They even had several large chalkboards in the middle of the lunch area, where we could write our own messages. One of my fellow Artisan Design Team members, wrote the Artisan Winner on the board, so i added my initials near it. 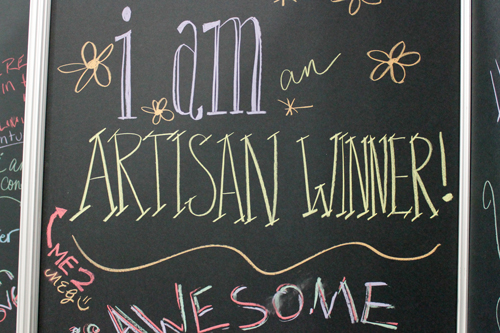 We had our closing session, and received two additional free stamp sets. So, just for Saturday, we received the Convention themed set, the Ronald McDonald set and a hostess set from the upcoming Holiday Catalog. Tomorrow I'll post pictures of all of my "loot" from Convention! We capped off the evening by going to Red Rock brewery. I had been to this restaurant back in 2005, which I think was the last time I attended Convention. I had an awesome salad, but couldn't remember the name of the restaurant so I could go there again. So in perfect symmetry, it was the restaurant that Susan suggested we go to! I had the chopped salad, which was just as good as I remembered. 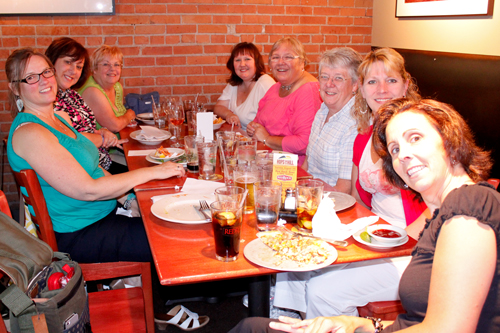 All in all it was a wonderful trip full of friends and fun. Hoping I can go again next year for Stampin' Up!'s 25th Anniversary! Thanks for stopping by.

Last Friday I was in Salt Lake City for Stampin' Up!'s annual convention, and enjoyed another day of classes, make and takes, shopping and looking at displays. Convention really is a fun thing. Today's main excitement for me was attending the dinner with Shelli Gardner, Stampin' Up!'s president, as well as others fro Stampin' Up! and the rest of the 2012 Artisan Design Team. We had dinner at Fleming's Steakhouse, which is a very nice steakhouse right in Salt Lake City. 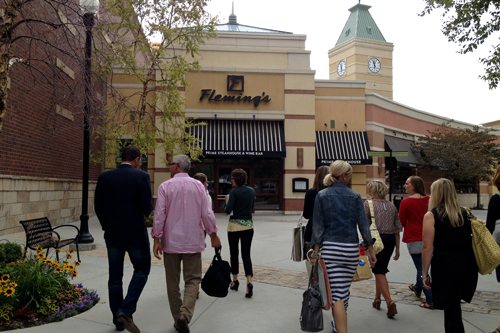 When we got to the table, I found this at my place setting. I also discovered that I was able to sit right next to Shelli! I was a little startstruck at first, but I managed to make some decent conversation afterwards. 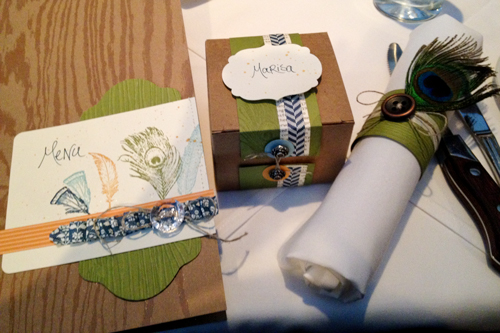 We had scallops and mushtroom brushetta for appetizers, I had salmon in a barbeque glaze with mashed potatoes and asparagus as my main course, and there was even cheesecake with raspberry sauce for dessert. 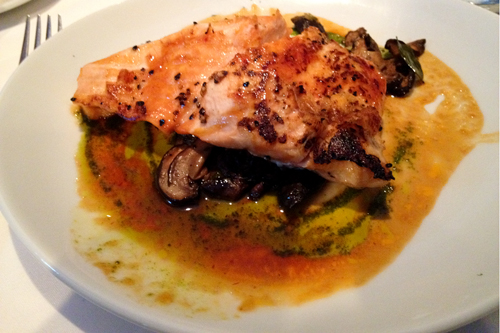 I think it's funny that the sun shone on my dessert when I was taking this picture!

Here is a picture of all of us after the dinner. In the front: Erica Cerwin, Cindy Beach, Wendy Wexler. In the middle: Heidi King, Jane Lee, Marisa Gunn (that's me!), Heather Summers, Jeanna Bohanen, Sarah Sagert. In the back: Holly Lunsford (Concept Artist for SU), Amy Yingling (SU Concept Artist Coordinator), Shelli Gardner, Amy Schwartz (VP of Sales for SU), and Amy Bollman. 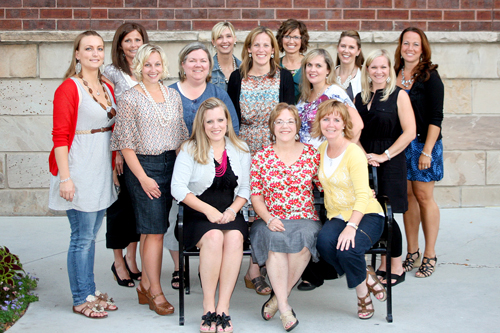 After that, I went back to the hotel, and hung out with everyone from my group: Susan, Connie, Patti, Vicki, Anita, Lois, Stacey and Dorothy. I looked at their swaps, and they looked at all of my Artisan goodies. And we got a little punchy near the end! Too much fun. 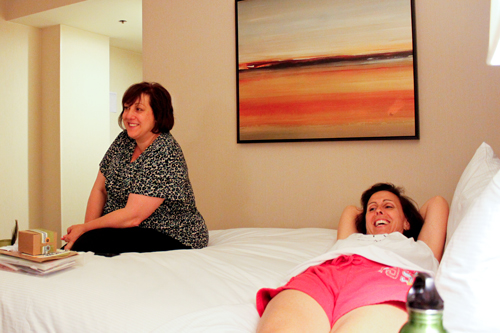 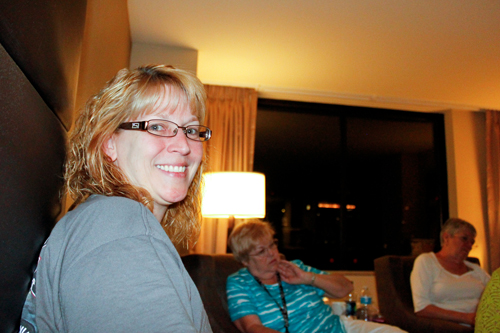 Also, here is a picture of all of the coordinated pieces I received for being an Artisan: the invitation, the menu, the napking ring, the box with a personalized Artisan stamp with my name on it. Even the contract was delivered in a fancy, matching pocket! So cool...still pinching myself. 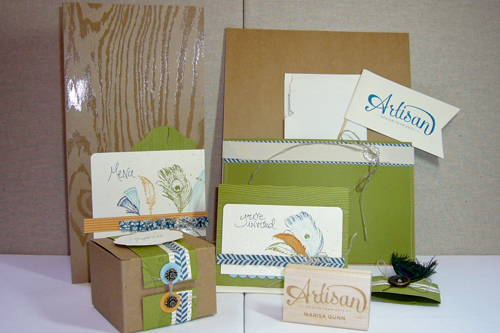 Last week I was in Salt Lake City for Stampin' Up!'s annual convention. Thursday was the first official day of the convention, and we started with a general session first thing in the morning. The presentation was awesome, as it usually is. 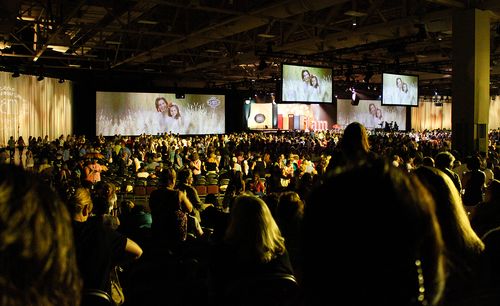 They also had a special speaker named Jason Dorsey, who speaks and rights about Generation Y (and really all of the generations). He was very entertaining and also had lots of great information to share. Went to a couple of classes, did some of the make and takes and checked out the sample boards.We also did a swap during lunch for all of the Artisan Design Team finalists. I didn't get there until part way through lunch, so I missed a lot of the fun and the picture that they took. But, all of the cards that were swapped were amazing! I'll probably share them here at a later date.

Thursday night was awards night, so I just had a simple dinner in my hotel room before getting dressed up. I got to go up on stage, and accept my Artisan Design Team award. 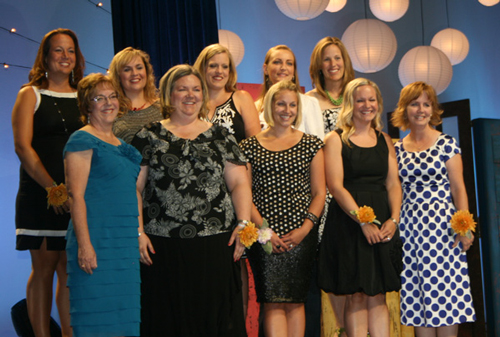 They gave me a flower corsage... 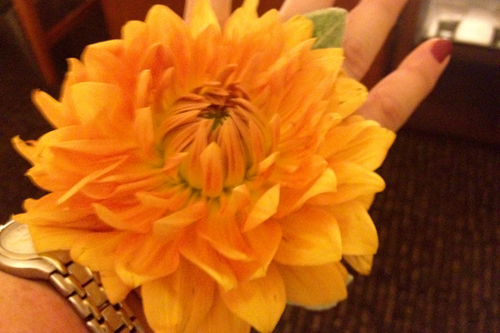 And a lovely bracelet. 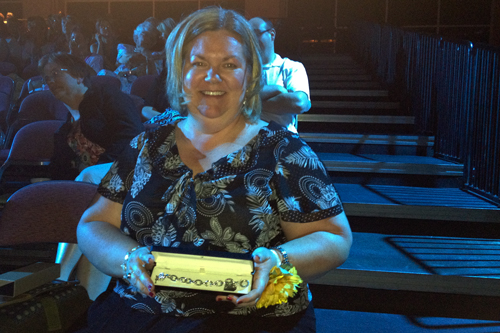 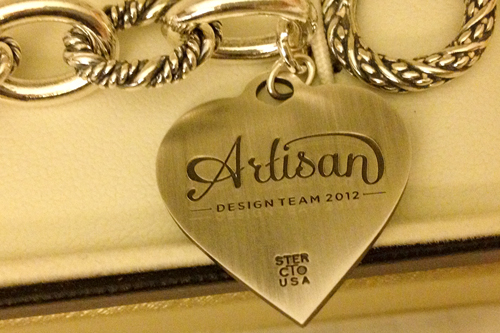 Overall, it was a great day!

Here is one more picture, of my other 3D project that I didn't post yesterday. The pictures are of my Grandma Masters (top row), Grandma Gunn (middle row) and Mom (bottom row). 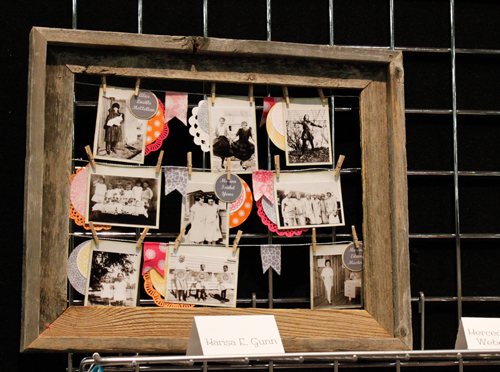 Tomorrow, I'll tell about the dinner I attended for the Artisan Design Team. Thanks for stopping by!

Last Wednesday, I flew to Salt Lake City for the Stampin' Up! 2012 Convention! On my flight in, we flew over the Salt Lake and I snapped a pic with my iPhone. Love it for quick pictures of everyday events. 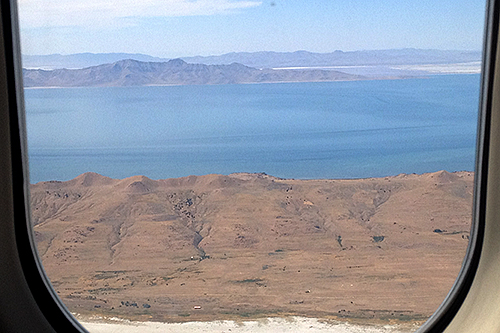 After landing and checking into my hotel, I headed over to the convention center to check in. Then I headed directly to the Info and Awards booth as I had received an email inviting me to the booth to pick up an award. I gave them my demo ID, and then they handed me 3 items: a flower with a flair pin in the center with the name "Artisan" on it, a card and a letter. 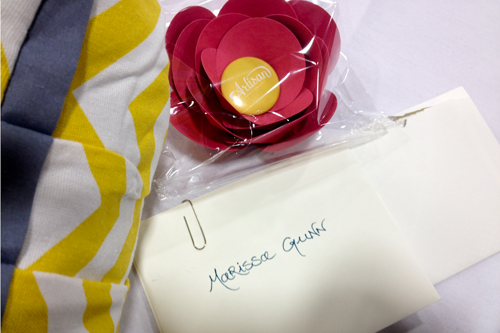 I assumed that the flower was maybe for all 20 of the Artisan Design Team finalists because we thought we wouldn't find out the 10 winners until Thursday night at the awards ceremony. Then, I open the card...which was actually an invitation to the dinner with Shelli and others and the Artisan Design Team. At this point I was shaking because I realized that I must be a winner to have been invited to the special dinner. So, I opened the letter, which confirmed that I was one of the 10 winners! I had to read the letter a couple of times. Then, I headed over to see my contest entries on display. On the way, I bumped into my friend Cindy, who works with me at my day job and is also a fellow demo. She was kind enough to take a picture of my jubilant face in front of my projects. 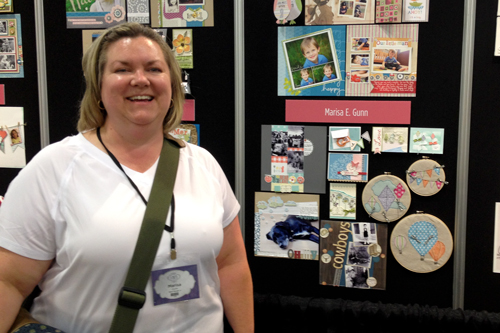 Me and My Projects!

We had dinner at Macaroni Grill, shopped at City Creek Center and then walked around Temple Square. The buildings are beautiful and well cared for. 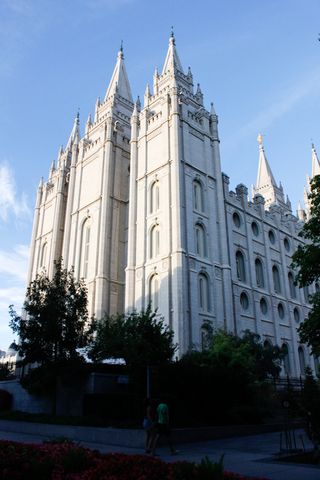 One more self portrait with Cindy, and then it was off to my room to try and sleep! It was hard to do with all of the excitement of the day and anticipation for the next day. 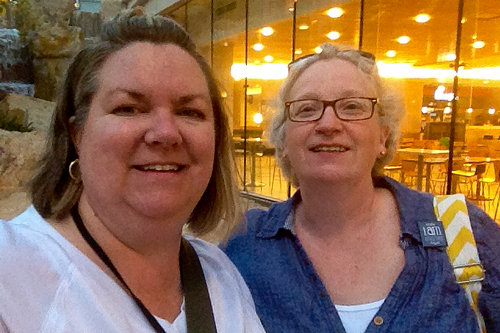 Cindy C and Me 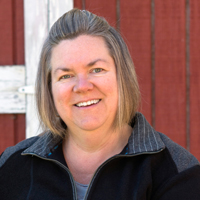 Blog powered by Typepad
Member since 12/2008